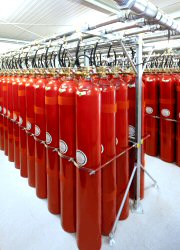 When considering different types of fire suppression systems for a place of business, the owner is likely to hear references to what is known as inert gas fire systems. Sometimes known as gaseous fire suppression equipment or clean agent fire suppression, these systems are considered one of the most environmentally friendly approaches to fire suppression. Before making a choice for the new system, it makes sense to understand more about how this type of commercial fire protection system works.

The idea behind an inert gas fire system is to reduce the amount of oxygen present in the area where the fire breaks out. This is important because fires need oxygen in order to spread. Remove this vital piece of the puzzle and the fire will be easier to contain.

While the oxygen level is lowered, remember that it does not eliminate oxygen from the space altogether. There is still enough present to support proper breathing as anyone in the immediate area moves along the escape route and exits the room.

What Gases are Used?

Several different gases may be used as part of this system. Argon or nitrogen are the most common gases that are likely to be part of the system.

How is the Gas Deployed?

There are several designs for this type of system. Typically class "C" electrical fires require a minimum concentration while class "B" flammable liquid fires require a higher concentration or lowering of oxygen levels to put the fire out. Settling on the right approach depends on the type of setting in which the system will be used.

The Importance of Detectors and Vents

While the inert gas is a key element in any fire safety measures, don't underestimate the importance of choosing the right alarms and making sure the vent system is configured properly. Kiddie smoke detectors should be just as efficient as those used in other types of structures. The vent system should allow a way for air to be forced from the space as the inert gas takes its place.

Talk with a professional today and learn more about what an inert gas fire system offers in terms of function, efficiency, and easy maintenance. Knowing what to expect makes it easier to decide if this approach is the right choice.

27
Jul
2018
Fire Suppression Clean Agent Filling Station
Control Fire Systems Ltd holds UL/ULC and Factory Mutual approval as a Kidde Fire Systems "First Fill" center for their line of FM-200 and Novec 1230 suppression systems. We ...
Details
02
Jan
2017
3 Fire Suppression Must Haves for Your Building
With a little time and effort, it’s possible to settle on a combination of solutions that provide maximum safety, comply with all local regulations, and will provide the best ...
Details
01
Apr
2021
What is Condensed Aerosol Fire Suppression
Condensed aerosol fire suppression, a relatively new technology, is a system of aerosol containers or a single container, that are interconnected to each other and to a control panel, designed ...
Details